Cybercrime is a team sport, cybersecurity must be too, advises HP Wolf report 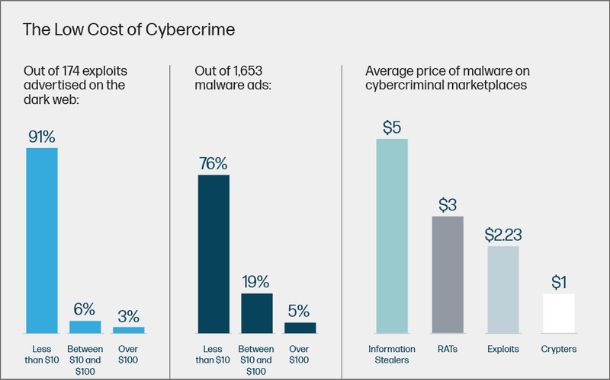 HP released The Evolution of Cybercrime: Why the Dark Web is Supercharging the Threat Landscape and How to Fight Back – an HP Wolf Security Report. The findings show cybercrime is being supercharged through “plug and play” malware kits that make it easier than ever to launch attacks. Cyber syndicates are collaborating with amateur attackers to target businesses, putting our online world at risk.

“Unfortunately, it’s never been easier to be a cybercriminal. Complex attacks previously required serious skills, knowledge and resource. Now the technology and training is available for the price of a gallons of gas. And whether it’s having your company ad customer data exposed, deliveries delayed or even a hospital appointment cancelled, the explosion in cybercrime affects us all,” comments report author Alex Holland, Senior Malware Analyst at HP Inc.

“At the heart of this is ransomware, which has created a new cybercriminal ecosystem rewarding smaller players with a slice of the profits. This is creating a cybercrime factory line, churning out attacks that can be very hard to defend against and putting the businesses we all rely on in the crosshairs.,” Holland adds.

HP consulted with a panel of experts from cybersecurity and academia – including ex-black hat hacker Michael ‘Mafia Boy’ Calce and authored criminologist, Dr. Mike McGuire – to understand how cybercrime has evolved and what businesses can do to better protect themselves against the threats of today and tomorrow. They warned that businesses should prepare for destructive data denial attacks, increasingly targeted cyber campaigns, and cybercriminals using emerging technologies like artificial intelligence to challenge organizations’ data integrity.

To protect against current and future threats, the report offers up the following advice for businesses:

Focus on winning the game: plan for the worst; limit risk posed by your people and partners by putting processes in place to vet supplier security and educate workforces on social engineering; and be process-oriented and rehearse responses to attacks so you can identify problems, make improvements and be better prepared.

Cybercrime is a team sport. Cybersecurity must be too: talk to your peers to share threat information and intelligence in real-time; use threat intelligence and be proactive in horizon scanning by monitoring open discussions on underground forums; and work with third-party security services to uncover weak spots and critical risks that need addressing.

“We all need to do more to fight the growing cybercrime machine,” says Dr. Ian Pratt, Global Head of Security for Personal Systems at HP Inc. “For individuals, this means becoming cyber aware. Most attacks start with a click of a mouse, so thinking before you click is always important. But giving yourself a safety net by buying technology that can mitigate and recover from the impact of bad clicks is even better.”

“For businesses, it’s important to build resiliency and shut off as many common attack routes as possible,” Pratt continues. “For example, cybercriminals study patches on release to reverse engineer the vulnerability being patched and can rapidly create exploits to use before organizations have patched. So, speeding up patch management is important. Many of the most common categories of threat such as those delivered via email and the web can be fully neutralized through techniques such as threat containment and isolation, greatly reducing an organization’s attack surface regardless of whether the vulnerabilities are patched or not.”